We’re deep in the winter season right now, but the real problem lies in knowing when it’s going to end. Last year, the midwest was assaulted with near blizzard-like conditions.

Walking in Chicago just wasn’t an option. And the storms hitting New York and the East coast already this year have been some of the most brutal we’ve seen in decades.

Spring and Summer are on the way, but how would we know without a calendar? Last year, it barely reached 76 degrees in some parts of the country in the final months of the warmer seasons. 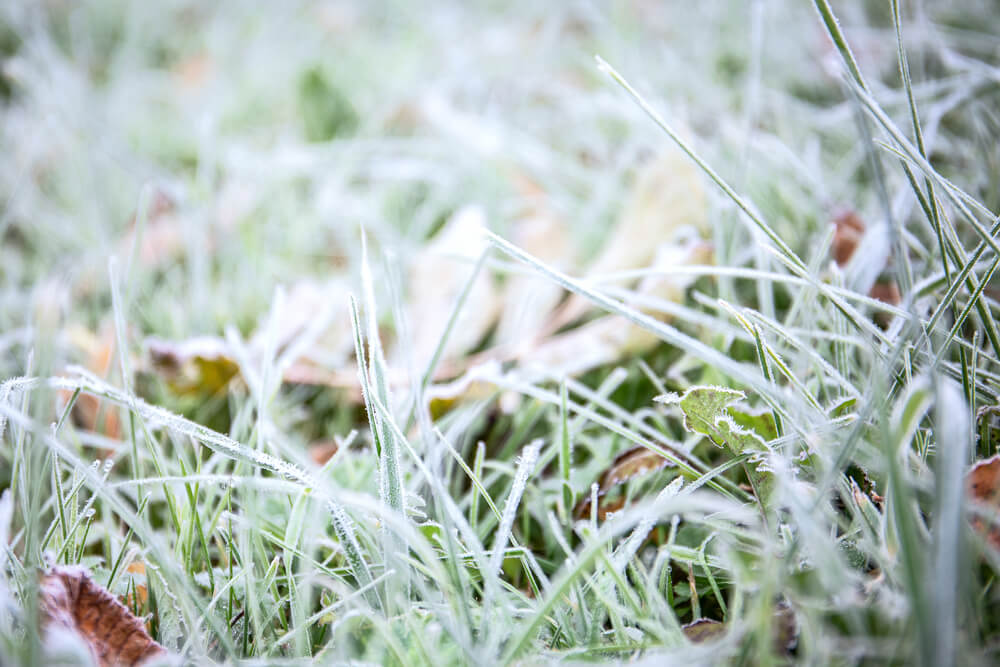 With cold being so abrasive, many gardening enthusiasts are thinking ahead about the damage frost can do to their lawn.

On cold autumn and winter mornings, it may look otherworldly to see every blade of glass glistening like sharp needles, but it’s far from magical.

Frost can cause serious damage, but fortunately, we have a few methods of protecting new grass from frost conditions.

Why Does Frost Cause Damage?

Frost occurs during clear, cold nights when the air outside becomes warmer than the grass and trees. It can either be light or heavy, with the heavier frost causing more damage.

Heavy frost has been known to eliminate flower beds and cause winter dormancy in plants.

When grass frosts over, the water in the grass freezes. This causes the cells of the grass blade to expand and split. The ice then splinters into microscopic daggers that further damages the grass.

But the grass is resilient and can manage some damage above ground. The grass’s roots will heal as the weather warms, allowing some growth.

But after a few nights of undergoing damage from frost, that healing process will be stifled. Eventually, the grass will just go dormant until the weather improves.

New grass seedlings are especially vulnerable to frost due to the fact that they haven’t developed their roots yet. Frost freezes the upper soil, making it impossible for the grass to get the nutrients and water. If you’re expecting frost soon, here are some ways to protect your new grass from dying.

Even dormant plants must absorb water all year long. It may seem like you’re just encouraging the frost by watering your new grass before it comes, however, the water you add to the soil will retain heat. Water, in this case, works as an insulator.

This makes it less likely for the ground to freeze. Ideally, you want to water your lawn in the evening to protect your grass overnight.

If you can, set a timer to have your watering system turn on for a half-hour every three hours throughout the night. The water coming from your hose is usually 20 degrees above freezing. If you add some warm water, it will further protect your grass.

Read this for more information -> What Temperature Is Too Cold to Water Grass?

One way to help grass sprouts from freezing and ultimately dying is to cover them with a tarp or cloth weighted down. The idea is to allow the ground to retain heat. Even a thin layer of coverage will keep the warm air near the ground. In the morning, take the covering off to expose your seedlings to the sun.

3. Avoid Walking on Your Lawn

One of the worst things for frosted grass is foot traffic. Stepping on frosted grass kills it. Any pressure on frosted grass causes the water molecules to rip through the plant’s cells. Try to stay off your lawn overnight, and if you have animals, do what you can to keep them away as well.


This may be somewhat of an aside, but it’s good gardening etiquette 101. If you have any potted plants, the easier way to protect them is to simply take them in overnight. Be sure, however, to return them outside in the morning so they can enjoy the sun.

If bringing them inside isn’t a possibility, shield them from harsh wind and keep them close to one another so they can protect each other.

Making a habit of bringing your plants indoors when frost is likely will get you thinking about the other things you need to protect.

5. Fertilize Before the First Frost

When you’re anticipating the first frost of the year, applying fertilizer is advisable. This is best done in the late fall. This last fertilization of the year will help any grass you have build up the nutrients it needs to survive. Additionally, it should come out much more green in the spring.

You should also avoid cutting your grass in cold weather. You want the blades of any grass you have long, so it can take in more nutrients. Mowing your grass will leave it more susceptible to frost.

What If It Freezes After I Plant Grass Seed?

If frost comes unexpectedly and you were unable to prepare for it, this does not mean the seeds are ruined. It just lays dormant until the weather improves. The problem occurs when the grass seeds have begun to sprout; they are not strong enough to survive the frost.

Grass seeds typically sprout in a few weeks, but it takes several more to have the strength to survive a frost. A planting guide should help you figure out the safest time to plant your seeds and what seeds might have the best chance at surviving freezing weather.

A lot of people use straw to cover their grass seed, but is it enough coverage to protect from frost? In some cases, yes. Just a simple, thin layer of pine straw is a good place to start, however, extra protection might be necessary. Linen or burlap is often used. The last thing you want to use is plastic, which can collect condensation.

This seems like an easy yes or no question, however, it’s slightly more complicated than that. The short answer is no, grass seed will simply go dormant until the next growing season.

But this is not to say that it’s safe to plant grass seed when there is imminent frost. If the seeds sprout into seedlings, they won’t have the strength to get through the frost.

Why You Shouldn’t Seed Before the Last Frost

Getting a headstart on your planting for the Spring probably sounds like a great idea, but it’s actually not as helpful as you think. Planting too early, like before the final frost, can lead to dormancy, a longer sprout time, and weed competition, all things that are going to hinder your grass from coming in properly.

Most grass prefers the soil to be at least warmer than 70 degrees Fahrenheit, hence why they’re usually planted in the spring. But temperatures any cooler than that can lead the plant to go dormant for the growing season. It’s a natural defense mechanism, and if you plant too soon it’ll kick in.

There are some species of grass that actually prefer temperatures closer to 50 and 60 degrees Fahrenheit. Seeding this species around those temperatures will ensure optimum growth, but you can’t do it until after the final frost. That last frost is effectively going to kill the seeds.

Grass usually starts to germinate after three weeks of proper soil contact, aided along by warmth and consistent watering. If you plant seeds before the last frost, that germination is going to slow down considerably. This leads to very thin coverage on your lawn.

Weed seeds can germinate under cooler temperatures than grass. With your grass just trying to survive the last frost, they’ll be confronted with serious competition from the growing weeds. The weeds will steal the nutrients the grass needs. As a result, when your grass does finally sprout, it’ll do so unevenly, around large patches of unwanted weeds.

Frost is a genuine threat to your new grass, either seriously hindering its growth or effectively killing it off before it has a chance. And there’s nothing worse to a greenthumb than a Spring full of weeds, poorly grown grass, and large patches of naked soil.

This is why it’s recommended to always cover your new grass during nights when frost is assured, or even when there’s a chance of it. Beyond covering with tarp or straw, fertilizing in the late fall will ensure your grass has the nutrients it needs to survive the winter. Finally, continuing to water your plants when appropriate should keep them from losing out to the harsh weather.

Following these steps is the key to preserving the beauty you work so hard in the Spring to accomplish.

How To Melt Snow On Grass